Home PageBlogIs it Safe to use a Hands-free Device to Talk on a Cell Phone while Driving?

Is it Safe to use a Hands-free Device to Talk on a Cell Phone while Driving? 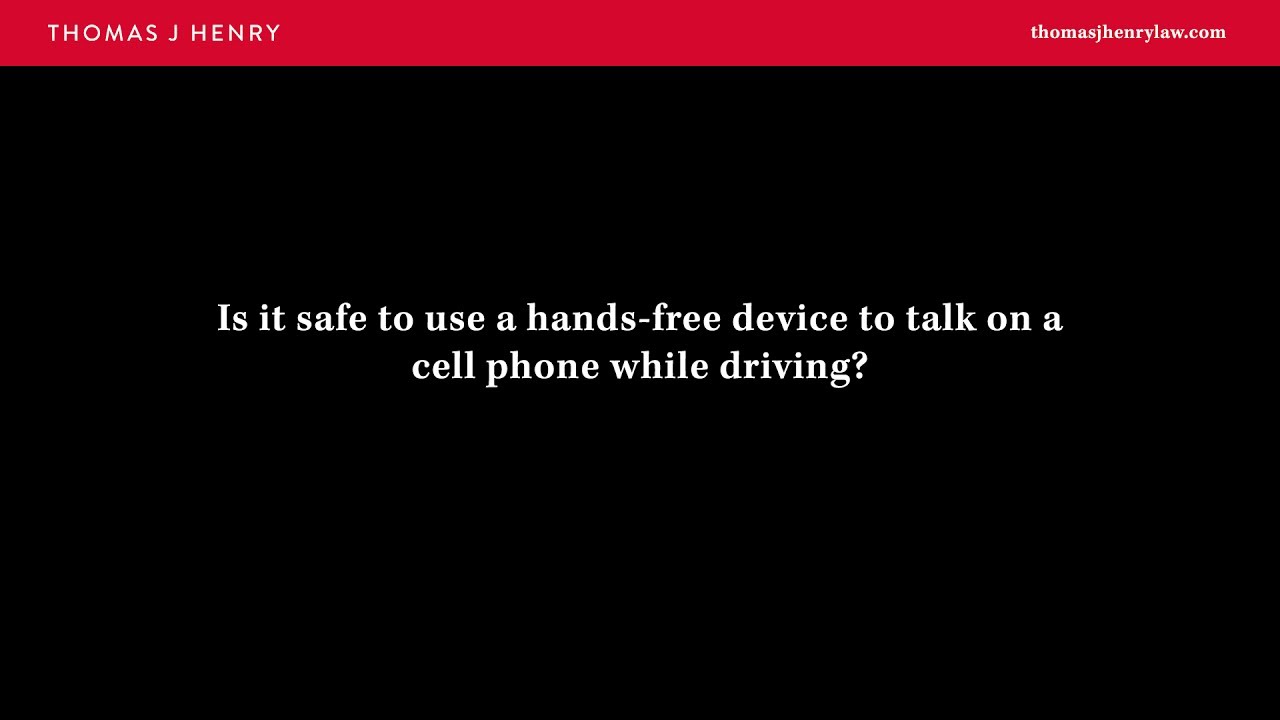 Hands-free devices come in various forms, from wired or wireless headsets to Bluetooth earpieces or vehicle integration. Many people believe that it is safer to use these hands-free devices versus a handheld device while operating a motor vehicle, but there is mounting evidence that proves the contrary.

It is common knowledge that driving drunk severely impairs your ability to operate a vehicle safely, which is exhibited by the more than 10,000 people who lost their lives in drunk driving wrecks in 2016. Unfortunately, many motorists are unaware of the impairment caused by using a hands-free device while driving, which has been found to be as severe as driving intoxicated and no safer than using a handheld device.

It’s easy to understand why much of the public adheres to the common belief that using a hands-free device over a handheld device while driving decreases their risk of a car crash. In the fight against distracted driving, thus far, states have only placed restrictions on handheld devices or the act of texting while driving. Hands-free mobile devices are seen as a solution to the distraction caused by using its handheld counterpart.

In theory, a hands-free device allows drivers to keep their hands on the steering wheel and their eyes on the road, decreasing the level of distraction. In reality, talking on the phone — hands-free or handheld — takes your mind and cognitive attention away from the primary task at hand: driving safely.

According to the Centers for Disease Control and Prevention (CDC), there are three types of distractions:

Operating a motor vehicle requires a driver’s full attention, free from any form of distraction. Any one type of distraction can drastically increase the risk of causing an auto accident. As mentioned before, despite allowing drivers the ability to keep their hands on the wheel and eyes on the road, hands-free devices cause a significant cognitive distraction.

It is very clear why texting and driving is such as dangerous activity, as it involves visual, manual, and cognitive distractions at the same time. To combat distracted driving accidents, 47 states have laws in place banning this reckless and dangerous habit.

How Dangerous is Talking on a Phone while Driving?

A study conducted at the University of Utah found that talking on a cell phone, handheld or hands-free, is comparable to driving drunk in terms of impairment. Participants in the study drove a driving simulator four different times: while undistracted, using a handheld device, using a hands-free device, and while intoxicated to the legal limit of .08 blood-alcohol level.

The researchers discovered that there was no significant difference in the degree of impairment between handheld and hands-free cell phone usage.

The researchers concluded that impairments associated with using a cell phone can be as profound as those associated with drunk driving. A statistical analysis of the study and previous University of Utah studies showed that cell phone users were more than five times more likely to get in an auto accident that undistracted drivers. This increase in risk is comparable to that of drunk drivers.

The National Safety Council (NSC) compiled more than 30 studies conducted by researchers around the world comparing the distractions of handheld and hands-free phone use while driving.

In each of these studies and reports, no evidence was found to suggest that using a hands-free cell phone offered a safety benefit while driving. The NSC addressed the risks created by having a cell phone conversation while driving, including inattention blindness. Inattention blindness is when a driver “looks at” the surroundings in front of them but fails to actually “see” or process the objects.

Due to the cognitive distraction, drivers on cell phones miss an estimated 50 percent of the information in their driving environment. Traffic signals, stop signs, road sign warnings, pedestrians, and other motorists could be regarded but not truly processed by a driver distracted by a phone conversation.

Consequences of Mobile Phone Use while Driving

The following statistics regarding distraction-affected crashes are provided by the National Highway Traffic Safety Administration (NHTSA):

The National Safety Council and other anti-distracted driving advocacy groups believe that the true numbers of fatalities and injuries linked to distraction-affected crashes are much greater. In a study conducted by the NSC, it was found that only half of fatal crashes tied to known mobile phone use were coded correctly in the NHTSA database. Because every state’s reporting procedures following an accident vary, the data compiled by NHTSA could be skewed to designate a smaller amount of crashes caused by distraction.

Restrictions on Cell Phone Use while Driving in Your State

Laws vary from state to state regarding the use of mobile devices while in the operation of a vehicle. Some regulations restrict only the act of texting and driving, while others ban all handheld use of phones. It’s important to understand that no matter what the law is in your state, driving while using a mobile device, handheld or hands-free, is a dangerous distraction.

Here is a brief rundown of cell phone use while driving regulations in the United States:

Throughout the country, some local jurisdictions have enacted their own bans on mobile phone use while driving. To see a detailed chart and maps of the various state laws and whether a violation is enforced as a primary or secondary law, visit the Insurance Institute for Highway Safety (IIHS) website.

Hit by a Distracted Driver? Contact an Experienced Injury Attorney

If you’ve been injured in an accident with a distracted driver, call Thomas J. Henry. A driver may cite their use of a hands-free device as safe driving, but this is not the case. Our firm has handled many lawsuits involving commercial vehicle and personal vehicle drivers where we have established the dangers of hands-free devices and their comparable risk to drunk driving.

If you were hit by a driver using a hands-free device, it’s important to assert your rights and hire an experienced accident attorney to represent you. Thomas J. Henry has the experience and legal resources necessary to hold irresponsible drivers accountable and recover compensation for the injuries they have caused. Contact us today and speak with an attorney for a free case review. Whether you need a car accident attorney in Dallas or are looking for representation in a different part of Texas, we are available 24/7 – nights and weekends.